At Your Leisure – The Eye of the World 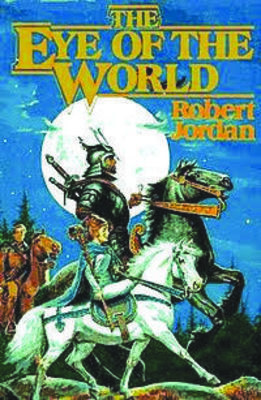 I’ve got more books than I can read in the next 5 years, even if all I did was sit and read. This isn’t hyperbole by any means. I have a bunch of books. They span virtually every genre and they’re all jumbled up on shelves all throughout the house. I need to organize them, but don’t have shelf room left. Stacks on stacks in front of stacks shoved into shelves, it’s nuts. It’s also literary heaven, for me at least.
Well, I’ll pick up a book and put it somewhere and forget about, sometimes for years. That’s what happened with a hardback copy of The Eye of the World. I purchased it for a dollar at a library booksale long ago, put it on a shelf and forgot it was there until a few weeks ago when I was sorting and cleaning stuff up.
I’ve been in the mood for lots of science fiction and fantasy, so it seemed a great time to dig into this massive doorstop of a novel.
I really wish I had read it when I first bought it, I might have all of the series by now.
I wasn’t even half-way through the book when I decided that I would have to have the rest of the series.
Fantasy is often about the big quest, that overarching story that is behind the smaller elements within the tale, and The Eye of the World is no different. I won’t delve into the story itself, because it does follow a number of fantasy tropes, and I don’t want to spoil even a single page of this magnificent novel.
Robert Jordan was an amazing storyteller. His ability to bring characters to life on the page and to bring the reader into the world in such a way that you feel it is a real and living place is amazing and wonderful.
It’s obvious, within the early pages, that these characters mean much to the author, and he makes you care about them as much as he does with ease.
The journey each character faces, alone or with various companions, is engaging. In many cases, the reader and the characters are visiting new and fascinating places for the first time, together. It’s easy to get lost in the sense of wonderment and awe the characters feel, as you feel almost the exact same emotions right along with them, whether it’s seeing cities or mountains they’ve only ever heard of in stories, or witnessing the reality of the brutal Trollocs for the first time.
The Eye of the World is also great for readers of all ages. At no time will an adult feel as if they’re being narrated down to, and younger readers can (safely) lose themselves to a story, that while fraught with peril, isn’t anywhere near being “Adult”.
If you’re a fan of fantasy, or simply love brilliant storytelling, then like me, The Eye of the World by Robert Jordan just might be your introduction an exciting new series.