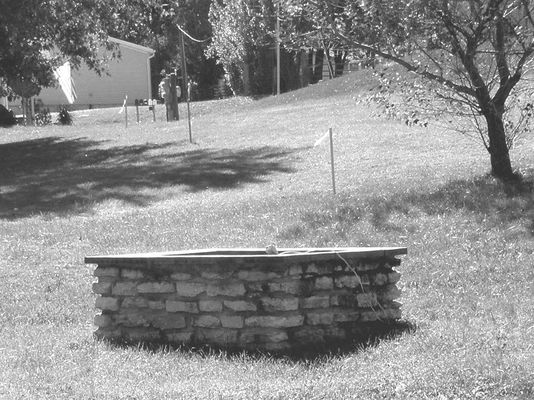 The following article and photo are courtesy of Ron Leake, president of the Ralls County Historical Society.

By JOE BURNETT IN 1900
Northeast Missouri comprises that part of the state of Missouri lying north of the Missouri River and east of the western boundary of Chariton County. In the territory thus embraced are the counties of Adair, Boone, St. Charles, Montgomery, Callaway, Marion, Audrain, Warren, Lincoln, Pike, Lewis, Clark, Knox, Sullivan, Macon, Chariton, Randolph, Howard, Monroe, Scotland, Ralls, Putnam, Schuyler, Linn and Shelby. It is not the oldest section of Missouri, as far as settlements by the white man make for age. That distinction belongs to southeast Missouri where is Ste. Genevieve oldest of Missouri towns.
Immigration turned toward the north from St. Louis, the gateway, as toward the west. Maturin Bouvet, a Frenchman, had found salt springs in Ralls County in 1792 and shortly afterward, obtaining a grant of land, had built a cabin and warehouse in Marion county. At the close of the War of 1812, English-speaking settlers, “finding the Boone’s Lick country crowded,” moved on to the Salt River country in what is now Marion, Ralls, Shelby and other counties of that section and English civilization began.
Ralls county has but a few miles of Mississippi river frontage, only about twelve or fifteen miles, but is especially well served by the Salt River and its branches, running from west to east, principal among which are Lick and Spencer creeks. Besides many springs of pure water, there are numerous and valuable salt springs in this county the principal being Freemore, Burnett, Ely, Briggs, Fikes and Trabue licks and the Saverton springs.
The first road in the county, north of Salt River, was the earth road from New London, Ralls county, to Hannibal, located shortly after 1818, when the sectionalizing surveys were made by the government engineers. This also followed an old Indian trail and has been much improved in the gradients in late years.
Ralls county has along its northern border the old Hannibal and St. Joseph Highway, which enters it a few miles after leaving Hannibal, and passes through Rensselaer, Huntington and Hassard, beyond which it runs into Monroe county at Monroe City. Ralls also has an old rock road running from New London toward Hannibal, that was built as a toll road nearly fifty years ago, but the toll was taken off and the road is now a free road but naturally not kept in as good condition.
Ralls – Population 1900, 12,287; all denominations, 5,192; Protestant, 4,578; Baptist, 1,069; Primitive Baptist, 37; Disciples, 2,375; Methodist Episcopal, 94; Southern Methodist, 457; African Methodist, 41; Cumberland, 95; Southern Presbyterian, 225; other Protestants, 185; Catholic, 614.
This county as early as 1852 had become the home of many settlers who had emigrated from Kentucky. A parish was organized and a church built for them at St. Paul’s. Father Andrew McBride was the pioneer pastor. New London, however, has since become the chief Catholic center of the county. Father E.A. Casey, of St. Louis, did some work here years ago. The new church was dedicated under the pastorate of the Rev. Daniel Donovan.
Nearly all the ministers who resided in the eastern part of the state held meetings or served as regular pastors in Ralls county. Joseph J. Errett, S.E. Jones, Timothy Ford, Jacob Coons, D.M. Granfield and, in later years, J.B. Corwine and E.V. Rice. Elder T.M. Allen, who traveled so extensively over the county, also held meetings. The following churches are reported: Ariel, Bethel, Center, Hays Creek, Huntington, Liberty, Lick Creek, New London, Newport, Ocean Wave, Perry, Pleasant Grove, Prairie View, Rensselaer, Salt River and Spalding. At New London, J.B. Corwine resided and preached for many years and in the meantime evangelized for many years. A school for young men and young women was maintained at this point. Professors Christian and Laughlin were the principal teachers.