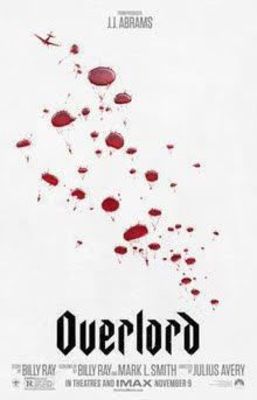 Occasionally, the weekends are for surfing all the streaming services and randomly choosing something that looks at least mildly interesting. Basically, something to pass the time when you really don’t feel like doing much else.
After watching a few trailers and moving on, I clicked the trailer for Overlord and was instantly ready to watch. I mean, the trailer featured some AC/DC! I’m in. Let’s rock! (I know that’s not the best reason to choose a lazy-day flick, but it works for me.)
The movie begins with a group of World War II soldiers in flight to the drop point for their most important mission. Take out the Nazi radio tower situated on a church in a French village. If that tower isn’t taken out, then their boys getting ready to storm a beach won’t get the air support they need.
The soldiers are talking of home, and their plans to be the one that takes out Hitler with a single shot, when they begin takin fire. It’s this scene that sets the gory tone for the rest of the movie, only ramping up from there.
The main character, Boyce, leaps from the door of the plane even as many of his fellow warriors are sucked out of the back of the burning fuselage. This is one of the best moments in the movie. Boyce’s plunge through the air, amid the gunfire and dogfights, shells exploding in the air, and his own fear before finally pulling that ripcord is both frightening and visually fantastic.
From there, the few survivors make it to the French village, befriending a French woman who tells them that there’s a lab beneath the church, under the radio tower the men are meant to take out.

When Boyce is sent out to retrieve several men on patrol, he’s forced into accidentally infiltrating the Nazi base, jumping into the back of a truck to escape a guard dog.
Inside, he finds the radio tower control room, and below it, he finds a pit into nightmare.
From here, the movie is less war flick and more hard-action horror movie, with Nazi created zombie-like soldiers being created in the subterranean laboratory.
The story moves at a decent pace, keeping interest the entire time, though there are a few eye-roll moments. I mean, these guys are on a secret, covert mission, so why does that one guy keep screaming and shooting his machine gun?
Overlord has plenty of those little B-movie issues, not to mention that it seems to move back and forth between being an EC horror comic book, to a fast-paced zombie shooter video game, even using camera angles that might have gamers reaching for a controller.
Despite playing fast and loose with WWII era language and styles, the movie is solid in its fight scenes and has more than enough gore to satisfy fans of even the bloodiest slasher flicks.
If you’re one of those who enjoy fast-paced Nazi-killing zombie-like war flicks, then Overlord is definitely worth your time.