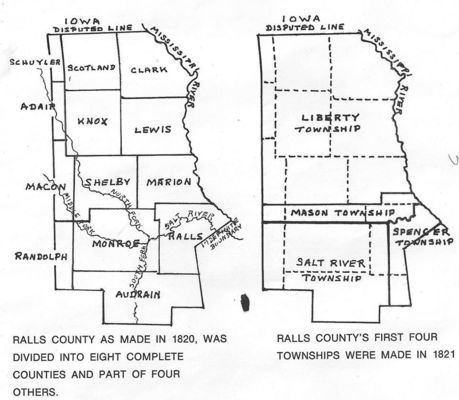 The following articles and photo are courtesy of Ron Leake, president of the Ralls County Historical Society.

HAPPY 200th BIRTHDAY RALLS COUNTY MISSOURI
Ralls County history as an entity began November 16, 1820, when it was formed as a county in the Missouri territory out of the northern portion of Pike County before Missouri became a state in 1821. It was named in honor of Daniel Ralls. Ralls County was larger than some states. Its northern border line was the present Iowa line and the western border extended to the a line between Ranges 13 and 14, and comprised the territory now forming Audrain, Monroe, Marion, Shelby, Lewis, Clark, Knox, and Scotland, and the east side of Randolph, Macon, Adair, and Schuyler Counties. Marion was taken from the northern part of Ralls in 1826. In 1829, Randolph was organized, taking a strip six miles wide from the west. At this time the county had a population of 4,375. Monroe was formed in 1831, and Audrain in 1836 – at which time Ralls assumed its present shape and limits.

Distributed by New London Chamber of Commerce (circa 1958)

HISTORY OF RALLS COUNTY AND NEW LONDON MISSOURI
This is a brief history of Ralls County, stating but a few of the colorful events that took place in the early organization of Ralls County. The information for this history was gained from various sources, and has been rewritten for present day readers.
The county known as Ralls was once in the province of “Louisiana” out of which this county, the state, and in fact, many states and territories have been carved. This tract of land embraces an area of more than a million square miles.
It is believed that the first settlement of the white people was made during the first part of the 18th century, at or near, St. Genevieve. In 1763, France ceded Louisiana to Spain, but Spain did not assume control until 1769. St. Louis was laid out by Pierre Laclede Liguest in 1764.
On the 14th day of December 1818, the counties of Lincoln and Pike were formed. Lincoln had the same area as it now has, and Pike extended north indefinitely and east to Howard County. In the territorial legislature, Pike County had two representatives, Colonel Johnson and Daniel Ralls. Soon after the meeting of the legislature, Daniel Ralls was taken sick and grew worse until October 20th, when he died.
On the sixteenth of November begins the history of Ralls County as a definite portion of the State of Missouri. On the sixteenth of November an act was passed forming from the northern part of Pike County, a new county, which was to be named after Daniel Ralls.
At the time that Ralls County was formed it was a county of magnificent portions, having an area larger than several states. It comprises the territory now forming Audrain, Monroe, Marion, Shelby, Lewis, Clark, Knox, Scotland and the east side of Randolph, Macon, Adair, and Schuyler counties. Marion County was taken from the northern part of Ralls in 1826. Randolph, Monroe and Adair were taken from the county of Ralls a bit later, and so it was not until the year 1836 that Ralls achieved its present shape and limits.
The first men to set foot in what is now Ralls County were Doctor Saugrain and Louis Bouvet, two Frenchmen who came from New Orleans. With their crew they came down the Mississippi River to the mouth of Salt River, to what is now the present site of New London. At this point the two men separated, and Doctor Saugrain went to Saverton while Bouvet went to Spalding. Bouvet established a fort at Spalding, and there he manufactured salt.
The pioneers remained happy and prosperous until the year 1812, when due to British influence upon the Indians, the Indians became enemies of the settlers. This led to the war of 1812. After this brutal war only one other siege of fighting was experienced. This battle was fought on Spencer Creek, south of New London. The last battle was at Cincinnati in the southwest part of Ralls County. After this battle the Indians left Ralls County and moved farther west.
On November 16, 1820, Ralls County was formed, and commissioners were appointed to locate the county seat. In 1822 the first court house of Ralls County was completed. This structure was about twenty-four feet in length, and eighteen feet wide. It was located in the western part of town, on the second block west of the present location. The building was two stories high; the upper story was the court room, and the lower story was the jail.