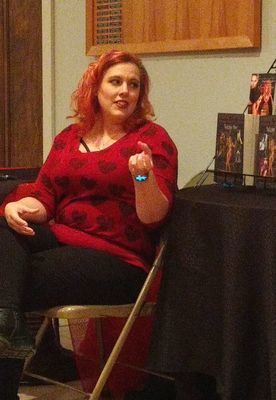 The Hannibal Writers Guild held their February meeting on Saturday the 8th at the Elks Lodge.

Exploring other ideas, even those that might be somewhat uncomfortable or off-putting, is simply part of being an author. Expanding one’s knowledge of various genres can inform each writer’s own writing, even if they aren’t writing in that specific genre.
Saturday’s theme, Writing Love & Lust was case in point with the visiting speaker, Author Leigh Savage. Savage writes what she deems “Erotica for the Truly Wicked.”
Leigh spoke at length about the many facets of writing Romance and Erotica, touching on subjects ranging from the writing styles involved to the in-and-outs of being independently published.
As a writer of erotica, Leigh has faced struggles, especially with marketing, as many either look disdainfully on the material, or dismiss it outright and therefore will not promote it within their various platforms, such as Facebook.
Besides discussing how she as a writer approaches writing intimacy in her books, she also described something of her process, relating that for a six-month period last year she was writing and releasing a new book nearly every two weeks. (According to Leigh, many of these works are in the 10k word range.)

Savage was well received by the group of writers attending the meeting, with a lengthy Q&A following her speech.
The Guild president, Dana Lockhart (A nom de plume) informed everyone that the guild’s 2nd “birthday” party would be held in two weeks, possibly at the Elks Lodge. Also, the guild is looking into having shirts made for members bearing the guild logo.
If you would like to learn more about Leigh Savage and her writing, check out https://www.leighsavagemedia.com/. For more information about the Hannibal Writers Guild, go to hannibalwrites.org or find the group on Facebook.