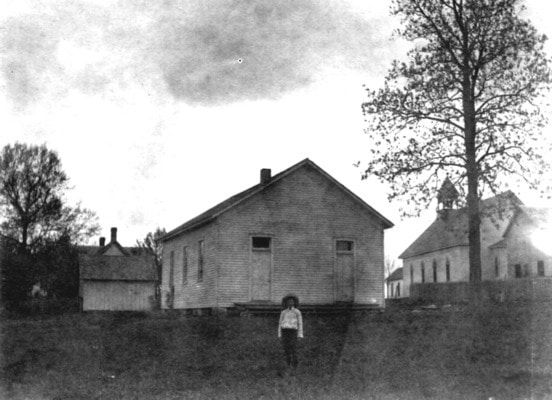 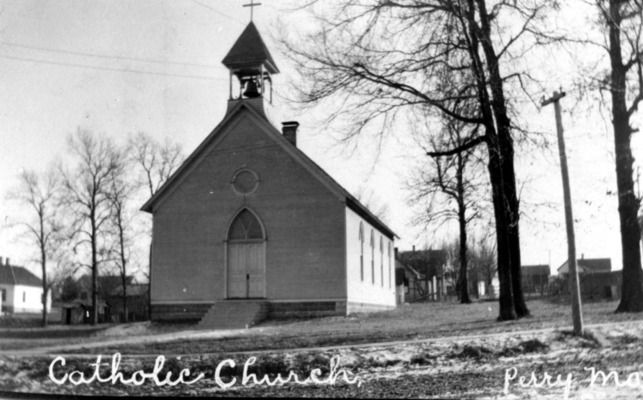 Perry Catholic Church Building Torn Down To Make Way for New Church
The following history of the Perry Catholic Church has been prepared for the Enterprise. Many of the older citizens here will remember the men whose names are mentioned.
In the year 1902 a committee consisting of Matthew Elliott, Michael Fitzpatrick and James Keenan were appointed by Father F.J. Ernest to purchase the public school lot for a building site for a Catholic Church. There were about ten Catholic families in Perry, the Green, Fitzpatrick and Key families near Santa Fe and a few families near Perry.
In 1908 the frame church building was erected and in 1912 the sacristy was added.
Joe Wells as foreman, with Tom Grimes, Frank Street, Jeff Crosthwait, Bud and Matthew Elliott and possibility others built the church. John P. Delaney built the foundation.
The first mass was said in the new church in the fall of 1908. Father Dan Donovan was pastor as Father Ernst had been transferred to Salisbury, Mo.
We now have about 60 families in and around Perry and southeast Monroe County.
The new church will have full basement for recreation rooms and the upper story will be built of brick veneer over Hadite blocks. Outside measurement of building will be 40 ft. wide by 72 ft. length.
The building will be a credit to our community and will be evidence of the growth of Catholicity in our surroundings. Rev. Thomas Gray is the present pastor of the Immaculate Conception Church.
Contract has been let by Bishop Marling to Byron Whiston of Canon, Mo., who has built a number of churches and other buildings, including two new buildings in Perry.
Mr. Whiston bought the present church building last week and is now tearing down the property.