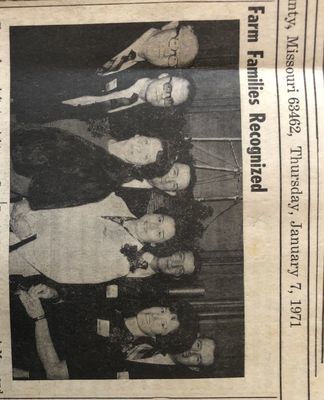 These articles and the photo are courtesy of Ron Leake, president of the Ralls County Historical Society.

Study Club Meets
American Heritage was the theme for the December 28 meeting of the Perry Study Club which was held at the Perry Christian Church with Mrs. Clyde Wilkey and Mrs. Clyde Willis as hostesses. Mrs. Annice Parrish presided over the business meeting in the absence of the president. The Club opened with the pledge to the flag, Club Collect and a prayer by Mrs. E.R. Caldwell, chaplain. Roll call was answered by sixteen members with their favorite Christmas Art or Music.
The GFWC report was given by Mrs. Bonita McIntosh on Pollution. Mrs. Robert Brashears gave a report on parliamentary procedures.
Following the meeting the program was presented by Mrs. Phil Gilmore, Fine Arts Chairman, on American Christian Heritage on nativity art from the Metropolitan Museum of Art, and famous Madonnas of the world from slides.
Mrs. Robert Brashears and Mrs. Annice Parrish presented an organ and piano interlude of Christmas music which was followed by the social hour. Refreshments were served by the hostesses from tables beautifully decorated in the Christmas theme.

Social Security Boost Assured
Although final legislation probably will not be enacted until early in 1971, action by the Senate and the House in the last days of 1970 have assured that Social Security benefits will be increased by at least 5%.
Both bodies have passed separate bills to raise benefits. But as I write this, the chances of obtaining a Hose-Senate conference to work out differences and enact a single bill this year appear to be lost due to the lack of time before adjournment January 3rd.
Both Senate and House leaders, however, have promised that Social Security will be priority business as soon as the new Congress convenes later in January.
In addition, the benefit increase will be retroactive to January 1, 1071, whenever a bill is ultimately passed.

The Two Bills
The Senate Social Security bill, which I strongly support and which passed by a vote of 81-0, would raise benefits 10% and would increase the monthly minimum benefit from $64 to $100.
The House passed a smaller increase of 5% and would raise the monthly minimum benefit to only $67.50.
In this inflationary time I believe the larger boost is needed to help persons living on fixed incomes cope with rising prices. Although even a 10% raise would not do the whole job, it would certainly do a better job.
Chances are excellent that the boost will be more than 5% when a compromise is finally worked out between the different House and Senate increases.

Ralls R-II Notice
We wish to make the following suggestions for cold weather dress.
Between December 15 and March 1, pant suits will be considered appropriate dress.
If you do not own pant suits, slacks will be permitted but, no jeans please.
The above dates are optional if bad weather occurs earlier or later than assigned dates.

Bloodmobile Gets 104
The Red Cross bloodmobile was in Ralls County at the New London Christian Church Tuesday, December 22. A goal of 100 pints of blood was set as the quota for the county. The goal was surpassed by four, there being 104 donors during the day. The county health department was pleased with the response.

Successful Farm Management has brought recognition to three Ralls County farm families: Mr. and Mrs. John Asbury, Perry were recognized for the State Award; Mr. and Mrs. David Levings, Perry, and Mr. and Mrs. Dean E. Peery, Laddonia, received County Awards. The awards were presented by the St. Louis Stock Yards Co., the Production Credit Associations of Eastern Missouri and the University of Missouri Extension Division. Each of the families received a plaque signifying the award at a dinner at the Crest House, St. Louis, on December 15th.