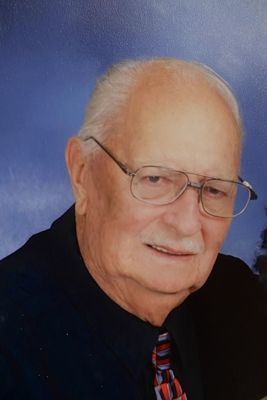 Services for Paul T. Hibbard, 93, of Perry, will be held at 11 a.m. Monday, February 10, 2020 at Olivet Christian Church in Center with Reverend Steve Goughnour officiating. Private family burial will take

place at a later time.
Visitation will be from 9 a.m until the time of the service at the church. Arrangements are under the direction of Bienhoff Funeral Home.
Mr. Hibbard passed away at 1:15 p.m. Wednesday, February 5, 2020 at Monroe Manor in Paris.
He was born January 29, 1927 in Ralls County, the son of Paul Otto and Mattie Pearl Dance Hibbard.
He married Erma Ruth Poage in Perry on May 28, 1950 and she preceded him in death on November 1, 1974. He married Shirley Yager Deckerd in Fairbanks, AK on June 14, 1977 and she survives.
Other survivors include: one son, Wiley (Susan) Hibbard of Perry; one daughter, Leanne Hibbard Reed of Perry; two stepsons, Harold (Sheri) Deckerd of Columbia and Monte (Cindy) Deckerd of Golden, CO; one stepdaughter, Sharon (Zia) Wiener of Princeton, NJ; one sister, Valena Booth of Santa Fe; three grandchildren, Thomas Hibbard of Chicago, IL, Julie (Jason) Blakemore of High Ridge and Gary (Kristen) Deckerd of Centralia; and 5 great grandchildren.
He was preceded in death by his parents, his wife, Erma, and one son-in-law, Walter Reed III.
Mr. Hibbard was a lifetime area resident, member of Olivet Christian Church and 1945 graduate of Perry High School. He entered the US Army on May 22, 1945 and served until January 5, 1947. He was awarded the Victory Medal Unit Award and the Army of Occupation Medal (Japan). He returned home to farm. Mr. Hibbard was an honorary colonel for Governor Hearnes and received the DAR Veteran of Month in April 2010. He had the opportunity to go on the honor flight in May of 2009. He enjoyed his cattle, antique cars, dancing and traveled to every continent except Antarctica.
Honorary pallbearers will be Eddie Joe Hamill, Jimmy Woodhurst, Kirk Morehead, Mark Hodges, Scott Hodges, James Utterback, David Poage, Virgil Poage, Bob Poage, John Lake, R.C. Harlow, Ron Leake and Steve Whitaker.
Memorial contributions may be made to VFW Post 4088, Perry, MO 63462, Friends of the Perry Carousel, Perry, MO 63462 or Olivet Christian Church Building Maintenance Fund, Center, MO 63436.
Online condolences may be made at www.bienhofffuneralhome.com.