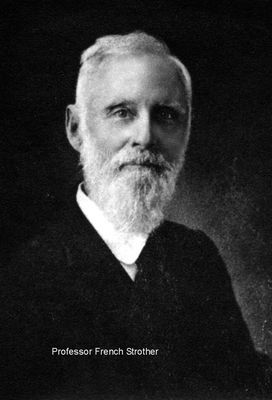 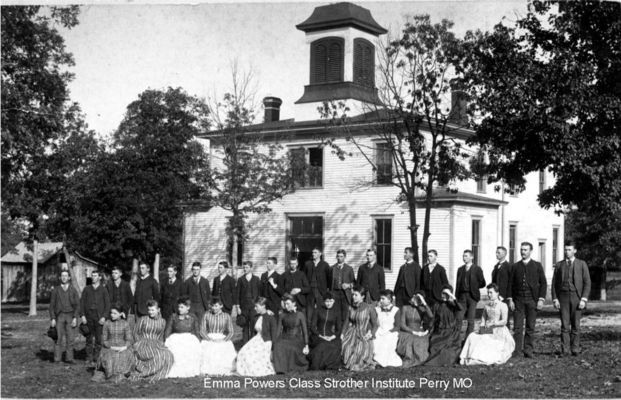 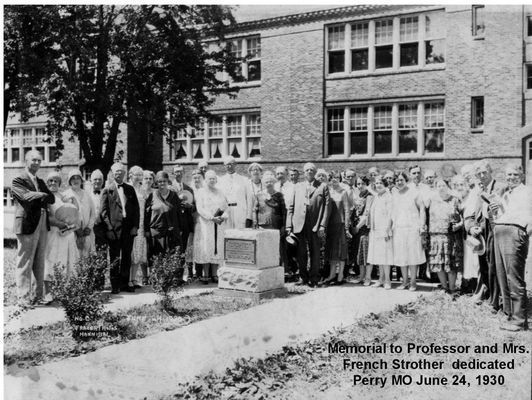 Strother Institute
Professor French Strother was the son of Captain French Strother, a well-known family of Virginia. He was educated in the University of Virginia located at Charlottesville. In 1850 he came west. Bring his mule team and salves, locating in St. Charles Missouri. Soon after his arrival, he was made President of Lindenwood Ladies College.
A few years later his father came to Missouri, locating in Callaway County. As time passed, Professor Strother moved to Monroe County, where he conducted a flourishing private boarding school, in a little town, named Strother, named in his honor. The school burned January 1, 1885. After being urged by citizens of Perry to locate here and open a school, he consented, coming in 1885. The citizens of the community purchased a tract of land about eight acres, donating it for the campus of the new school. Two substantial frame buildings were erected, by liberal donations of citizens, assisted by Mr. Strother, personally. This private school for boys and girls became known as Strother Institute. The founders were: James Gallaher, J.A. Clark, Dr. E. S. Armstrong, Dr. John Bledsoe, William Ely, Thomas F. Gill, Judge Edwin Hubbard, George Judy, M. P. LaFrance, W. H. Myers, James W. Neville, T. J. Pettitt, S. B. Smith, Judge J. H. Underwood, Joshua Ward and Aaron F. Ward.
The first term of the school opened in the fall of 1885. The first graduation was Miss Mamie Davis, who graduated in June 1886. the class of June 1887 was composed of H. P. Warden, E. Sparrow and Miss Ida Smith (Mrs. J. M. Greening), the school was under Mrs. Strother’s management for six years, when according to an agreement with the founders, the building and grounds became his property. He continued at the head of the school until March 1891.
In April of 1892, Mr. Strother sold the school to Hubert P. Warden. In May of that year, a board of education was organized, to whom Mr. Warden leased the property. The board in connection with Mr. Warden began a search for a competent man to take charge of the school. They selected Professor T. E. Peters, Principal of Shelbina Institute as Superintendent and Professor Lon W. Martin as first assistant. It was known as Perry Institute. During 1892, Mrs. E. S. Brooks was boarding house manager. The school was discontinued later becoming a public school.
Professor Strother was a prominent educator of Missouri for more than fifty years. He died in Mexico, Missouri, in 1916, and was buried at New Hope Church in Monroe County, near the little town of Strother. Through contributions of former students, a sundial was erected on the campus of the high school, as a memorial to Mr. Strother and his wife Susan A. Strother, who more than forty years before, had founded Strother Institute. On Tuesday, June 24, 1930, this memorial was unveiled by the founder’s daughter. Mrs. Alberta Strother Warden of Richland, Louisiana, who came to Perry with her parents and was a student of the school. About forty former students were present at the unveiling.
(Editor’s Note) The sundial is now displayed at the northern edge of the Bill Trower Memorial Park in Perry.