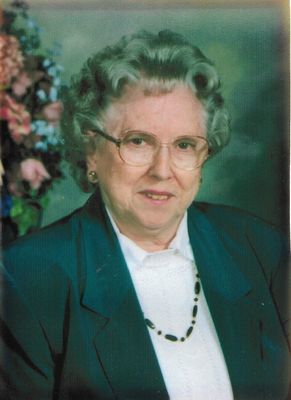 A Mass of Christian Burial for Virginia Frances Leake, 92, of Perry

will be at St. Paul Cemetery in rural Center.
Visitation will be Friday from 5 to 7 p.m. at Bienhoff Funeral Home

Manor Nursing Home in Paris.
She was born November 30, 1927 in Monroe County, the daughter of

James Alphonsus and Mary Alice Hamill Tully.
She married Albert Daniel Leake in Perry on September 6, 1951 and he

preceded her in death on January 10, 1985.
Survivors include; two sons, Gayle (Leanna) Leake of Vandalia and

Woodhurst of Perry and Trudy (Steve) Laws of Hannibal; one

Marynelle Power of Perry and Ruth Evans of Center; fifteen

and great grandchildren.
She was preceded in death by; two sons, Gary Leake and Dennis Leake

and one brother, J.D. Tully.
Mrs. Leake was a lifetime area resident and member of St. William

Catholic Church. She grew up in the South Fork Community between Perry

graduate of Gem City College. Prior to her marriage she worked as a

stenographer at A.P. Green Brick Plant in Mexico, then with her husband

at Leake's Garage and at Perry Nutrition Center. She was a member of

avid seamtress and enjoyed playing the piano. Her greatest blessing

were her children and grandchildren.
Pallbearers will be Greg Power, Kenny Cody, Jonathan Duckworth,

Daniel Leake, Landon Leake and Dawson Leake.
Memorials may be made to St. Paul Cemetery, % of Pete Hillgenbrink,

300 S. Smith St., Center, MO 63436.
Online contributions may be made at bienhofffuneralhome.com.