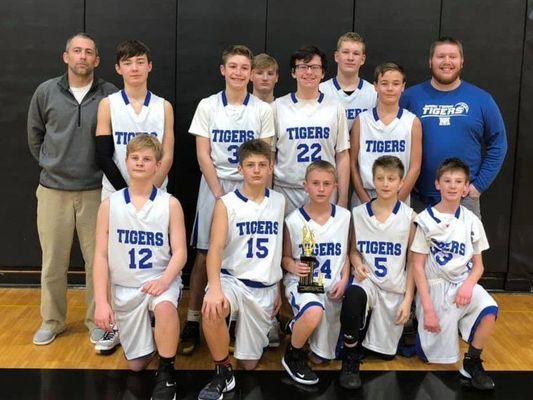 The Mark Twain Junior High boys took the consolation win in the Monroe City Eighth Grade Tournament on Friday, December 20, for their final game of the season. The young Tigers defeated Moberly 38-18. They lost their opening round game to Macon and defeated Monroe City in their second game. After the game, Coach G said, “This was a fun game. The boys played really well together.” A statement that was overheard from one of the players, “Everyone on the team has scored this season!”
Members of the team are front row from left: Nolan Epperson, Josh Black, Colten Eisele, Ayden Waters, and Cameron Brothers. Back row from left are Coach Steve Gschwender, Aydan Dye, Sam Northcutt, Chandler Miller, Ayiden Davis, Brayden Moss, Quinn Turnbull, and Coach Zach Kiel.