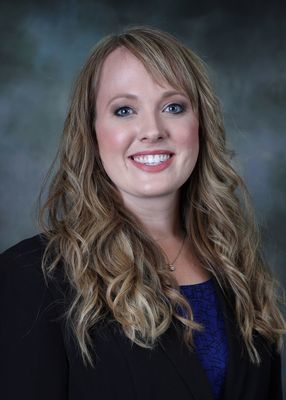 The Missouri Organization of Nurse Leaders recently recognized Kimberly Runquist, BSN, CCRN, Director of the Intensive Care Unit at Hannibal Regional Healthcare System, for her leadership in nursing. Kim received the 2019 Rising Nurse Leader Award for the state of Missouri. The award was presented Thursday, November 7, at the Missouri Hospital Association’s 97th Annual Convention & Trade Show in Osage Beach, Mo.
Kim is a transformational leader who articulates a vision to her team, leading a seasoned group of nurses and serving as a change agent to implement initiatives that add value to the intensive care unit. She has promoted the Salute to Veterans program, which assesses veteran status upon admission and then recognizes them after death with a procession through the hospital’s halls while Taps plays overhead. She has implemented the A-F Bundle for ventilated patients, among other initiatives, to improve ICU outcomes. She is a selfless leader who sends other staff to conferences rather than attending herself. Due in large part to her work, Hannibal Regional has been recognized in the Critical Care Medicine journal and two of her nurses have been recipients of the prestigious DAISY Award.