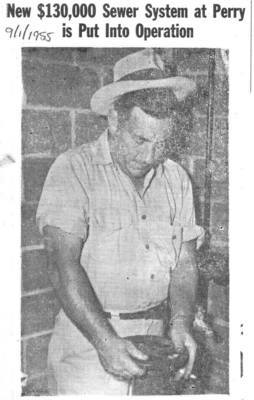 Officially Opened
Mayor Fred Dore, of Perry, Mo., turns the valve of the lift station pump, last Monday, as the new $130,000 sewer system of new design is officially opened for use. The system makes use of two lift stations, one at the south end of town and one at the north end, by which the sewage is conducted to a 5-acre lagoon at the north end of town, where nature, through the use of algae, will convert the sewage without the need for chemicals or other treatment. It is the first of this type of sewage system to be approved in Missouri. Mayor Dore said that Paris, Mo., Fayette and Montgomery City are also installing the same system. The Fayette, Mo., system will be under the control of the U.S. Public Health Service for study and research, the mayor said.

New $130,000 Sewer System at Perry is Put Into Operation.
This Ralls County town, with a population of 813, packs all of the public-spirited punch of a city five times its size, with the activity that is taking place in the introduction of the new algae-type sewage system, officially opened Monday, and made possible through the voting of a $130,000 bond issue late last summer. The cooperative spirit of the citizens of the community was indicated then, when, on August 24, 1954, the bond issue was carried by a vote of 382 for, and 29 against.
Further exemplification of this public-spirited cooperation was indicated when officially designated representatives of the community visited towns in North Dakota, where the new system was in use in an effort to find out all they could about this type of sewage disposal.
As a result of that visit, these men returned to Perry, convinced of the value of the system, as well as the economy of operation, and explained the matter to the citizens of Perry, thereby gaining both the confidence and support of the community.
From a purely technical standpoint, the system consists of a lagoon, built just out of the city limits, to which the sewage is conducted by two lift pumps. The lift pumps have been installed at the south and northwest edges of town. In the lagoon, nature is allowed to play her natural role, and the action of algae, plus natural evaporation, disposes of the sewage. The lagoon is expected to carry from three to five feet of water at all times. While provision has been made for a run-off if needed, city officials pointed out that evaporation is expected to take care of the matter, and not too much run-off is expected.
Perry citizens and officers are justly proud of their accomplishments. Bonds for the light and water department were paid off, and the city was debt free before the sewage disposal bond issue was voted. Now the city has only the $130,000 indebtedness and owns its own light plant, and a modern water supply system, debt free.
Perry has all of the appearance of a boom town at the present time, with the city busily engaged in laying sewer lines. The city now has approximately 32,000 feet of sewer line under construction, with applications for more coming in at a regular rate. The first building to receive the benefit of conversion to the new sewage system was the school house, where the conditions had become a problem.
Light and water superintendent Russell W. Itschner said that the recommended size of the lagoon is one acre to each 100 population. However, he recalled, when the committee visited Kearney, Nebr., a city of 12 thousand population, they found that a similar plant there was operating satisfactorily with a lagoon sufficient only for 1000 population to the acre.
Here in Perry, the sewage drops by natural drainage to low spots in the system, where the lift pumps carry it on to the lagoon. Sufficient water is run through the system by means of automatic pumps at the two lift stations to prevent any stoppage at any point, the pumps operating in synchronization to produce the necessary pressure and flow.
Perry’s water system is also of modern design, and operated from a 20-acre lake, pumping at the present time some 35,000 to 40,000 gallons daily for the city’s use. The lake did not fail, even during the recent drought, and in spite of the fact that the surface of the lake fell some three feet in the period, according to city officials. – Hannibal Courier-Post.