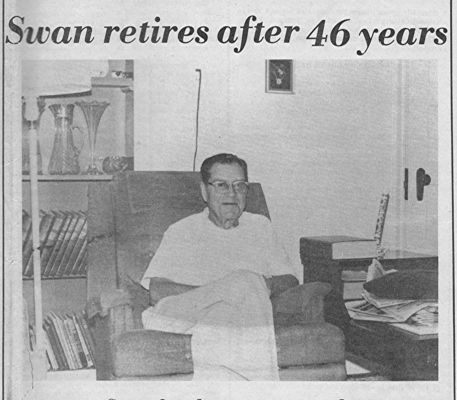 Dr. Swan retires after 46 years in Perry
By Vicki Griffin
After 46 years as a physician for the Perry area, Dr. E.T. Swan is retiring. Dr. Swan’s last day in his office was Saturday, July 17. Taking his place are doctors John Onik and Judith Fisher, who recently opened the “Scrub Oak Clinic” in the same office building that housed the Swan practice.
Dr. Ernest Swan of Hannibal and the former Velma VanSickle of Kirksville were married in 1929. Dr. Swan graduated from the Kirksville College of Osteopathy in 1931. At the time, his wife was teaching in a Kirksville school.
In 1936, during the time of his Kirksville internship, Swan was asked to come to Perry. Dr. William Powell, who had a practice in Perry was ill and a physician was needed to take over for him. Swan laughed and said “We thought we’d be here only a month or two, but we’ve been here ever since.” Their oldest child was six months old at the time of the move.
Dr. Swan’s first office, (which had been Dr. Powell’s) was set up above the old Perry Bank building. Doctor Brown, an M.D. and a dentist, Dr. J.W. Caldwell, also had offices above the bank.
Dr. Swan said that they had been in the present location for a number of years. The reason for the move to another building, was mainly the steep stairs, which they said many of the older citizens had a rough time negotiating.
Before the move was made, the Swans did extensive remodeling to one side of the building, leaving the other side unfinished. The building had formerly been the Goss Department Store.
When asked about the many medical changes over the years, Swan replied, “When I began, home deliveries were a common occurrence; no one went to the hospital, except for appendix or gall bladder operations.” Hospitals were much smaller then and typical medications prescribed by most doctors were strychnine, quinine, calomel and digitalis.” Swan added, that all of the antibiotics and vaccines had been discovered since he began his practice. Many were discovered since the second world war.
One of Dr. Swan’s first deliveries in Perry was one of the Dana Newell children. Swan said that when he did home deliveries, he had a portable delivery table that he carried with him. Instruments were sterilized by wrapping them first in muslin and then in newspapers. The instruments were then placed in an oven for 20 minutes.
One delivery, the physician mentioned was north of Perry. Many of the country roads were bad and most streams had only fiords for crossing. The stream, which ran near where the family lived had been flooded and the grandfather in the family came and carried Dr. Swan across on his back. The doctor smiled and added “I bet not many doctors can say that happened to them.”
Many of the doctor’s visits in the country were made on horseback. On a call to Greenlawn, he drove his car ½ mile, then borrowed a neighbor’s horse for the remainder of the trip. This was at night and in freezing rain. Swan said all of that didn’t bother him, until much later, when he could see the narrow path the horse had traveled. The path had a steep slope on either side. Mrs. Swan added, that her husband had been ill and when he returned home, his temperature had broken. The boy he had gone to see had a ruptured appendix and was taken to a hospital for surgery.
Over the years, Swan has doctored as many as four or five generations of Perry families. Among these are the Scobee, Newell, Willis, Muldrow, Norman, Brashears and Woodrow families.
When I asked Dr. and Mrs. Swan what they plan to do now that the retirement is a reality, they both replied, “Play a lot of golf and travel more extensively.” They also mentioned the possibility of wintering in a warmer climate. Swan was quick to add, “Just the winter months. Perry is our home.” “Perry had given us a good life.” “There were some rough hard times, but we enjoyed all of it.”
The Swans are the parents of three children, Mary Jo, Ernest and Jack.