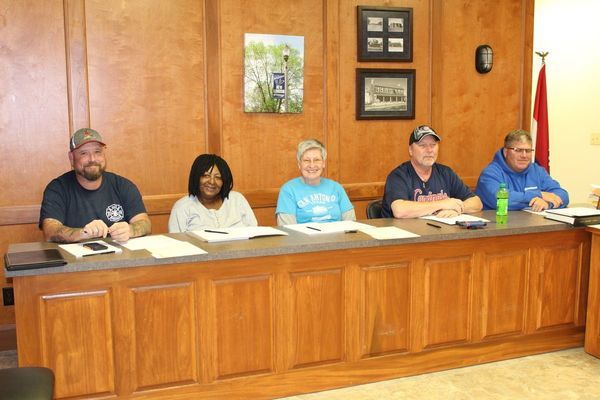 The New London City Council held their regular monthly meeting on Monday, October 7th. Present for the meeting were Mayor White; Councilmen Ballard, Adkisson, Powell, and McCourt; City Clerk Powell and Deputy Clerk Burton; City Attorney Brannon; Officer Smith; City Superintendent Miller and City Employee Lewis; and Fire Chief Quick and Fire Fighters Spires and Ward.
Mayor White called the meeting to order at 7 p.m. The minutes were amended to clarify the work being done on the Fire Dept’s truck. Motion to approve as amended made by Councilman Adkisson and seconded by Councilman McCourt. There were no speakers for Open Forum.
Superintendent Miller reported that water mains were being flushed and Lake Construction was ordering supplies to begin work on sewer. He also advised that he had contacted Midwest and requested a price for repair work on problem road areas. Councilman Adkisson asked about the timeline for repairing areas that are cordoned off at this time. Miller responded that the wet conditions have slowed and prevented work from getting done. Adkisson advised that the work needs to be completed before winter. Mayor White stated that the street light pole has been reset on Main St and asked if the concrete work on the side of the City Hall had been completed. Miller responded that no it had not been done yet. White also suggested that quotes be requested to seal/winterize the now exposed outside wall of City Hall. After some discussion, it was decided that flashing and a cap needs to be placed on the roof where it is now also exposed to prevent damage. Quotes will be solicited from Failor and Davis, with the request that the work be completed asap.
Fire Chief Quick and the Fire Department representatives were called out on a call.
Officer Smith reported that the NL Police Department had received a grant from MERMA for a new camera and stop sticks. The grant will cover 70% of the cost. Items will be ordered shortly. He also reported that the new car is now being used.
Clerk Powell advised that insurance representative Matt was unable to attend this meeting, but she did talk with him about a Cafeteria and FSA plan for employees. Both are available and each employee can determine which plan and how much they want to commit to that plan. More information will be gathered from eligible employees and a plan will be set up to begin the first of January. Powell also advised that the process of annexing Highway 61 has to be redone, starting with Public Meetings. It was decided to hold the first Public Meeting prior to the November Council meeting. Powell will get the notice published.
Mayor White advised that Brian Untietd, with MODOT, has scheduled a public meeting for Tuesday, October 29th, at 5 p.m. in the New London Lions Club building. Plans are to discuss what has been done at the Hwy 61 and Rt A intersection, future plans, and presentation of drawings. White shared that she had received complaints of speeding on West St and asked Officer Smith if their department could provide some extra patrol in that area. She also reported that there has been some discussion on erecting a garage for the police car in the area between City Hall and NECAC. Details still need to be worked out.
Final item of business was discussion and approval of bills. Motion by Councilman Powell and second by Councilman Adkisson to approve bills as presented.
Next meeting of the New London City Council will be Monday, November 4, immediately following the Public Meeting at 7p.m. The meeting date was changed from the regular second Monday of the month because of the Veterans Day holiday.
Meeting adjourned at 7:22 p.m.