At Your Leisure – The Institute 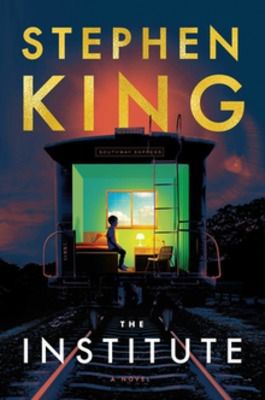 The release of a new Stephen King novel is always something I look forward to. So much so, that at times I’ve been at the store early and waiting for the book people to open the boxes so I could get a copy before it even hit the shelf.
I’ve been this way for years. Always with two specific authors, Koontz and King.
Stephen King’s newest novel, The Institute, hit shelves (I wasn’t there early) on September 10th. I was currently at the end of my F. Paul Wilson 2-month, 27 book marathon, and I finished that just a few days after King’s book came out.
I finished Wilson’s Nightworld, set it aside on the table, went to the shelf and immediately started reading The Institute. Finished it the next day.
It’s a fast read, and a good one.
The book begins with Tim Jamieson suddenly relinquishing his seat on a crowded airplane, prompting him to begin a journey that would eventually lead him to taking a part-time job in DuPray, South Carolina.
Though he was destined for New York, DuPray becomes his temporary home.
Soon after Tim’s arrival in DuPray, we’re introduced to the young genius Luke Ellis, who also has a special ability. When his emotions are high, he can move things with his mind, though only small things, and very rarely.
It’s because of this ability that Luke is kidnapped from his home and take to the Front Half of the Institute. There Luke meets other children like himself, with latent abilities, some can move things like he can, others can read minds.
Not long after reaching “Front Half” one the kids is taken to “Back Half”. When kids go to Back Half, they’re never seen again. None of the kids knows what happens in Back Half, they just know that they don’t want to go.
The novel moves forward at a rapid pace as the kids discover that the heinous tests they’re subjected to are meant to enhance their powers, turning them into something else. But what those powers are meant for is something none of them could ever expect.
The true genius of the novel comes in the last few chapters, where King, through the eyes of tortured children, asks the questions of What is right and wrong, and to what lengths would humans go?
Boiled down to it’s base elements, the novel is something along the lines of the old question, “If you could travel back in time, would you kill baby Hitler? And if you could, should you?”
With shades of Stranger Things and King’s own novel Firestarter, The Institute feels like classic Stephen King storytelling at it’s best. I can say with honesty that this is the first King book in a long time that I actually plan on reading again. Probably several times.
While The Institute isn’t horror in the more traditional King sense of killer clowns, creepy hotels, and murderous cars, it’s probably one of his scariest.
Find The Institute today at your local library.