At Your Leisure – Rambo: Last Blood 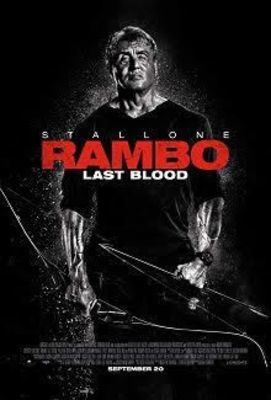 I don’t get to the theater often, for numerous reasons, the least of which is that I prefer the comfort of my own living room when watching a movie. Cost is of course a factor, but every once in a while, something comes out that I want to experience on the big screen.
I saw the 4th Rambo in theaters, and I really wanted to see what is supposed to be the final one the same way.
I went in having seen some of the early reviews, (which I tend to ignore anyway) and I did my best to have no preconceived notions about what the movie would be. I was glad I did, because Rambo: Last Blood is quite unlike any of the previous Rambo movies.
I can understand why some may have a complaint with this movie, seeing how most of the Rambo flicks start off with a bit of exposition and then dive right into the action, keeping it ramped up until the very end.
Last Blood took its time getting to the action, with only a few moments early on, leaving lots of time for a slow-paced expository tale that took a long hard look at the man John J. Rambo has tried to become.

As for me, I understood that early in the story. This is the last one, and after everything Rambo has gone through, now we see him in something of a domestic situation. Owning a ranch, training horses, raising a teenage niece. We’re never really given a lot of backstory about Rambo’s relationship with the girl and her family, just enough to know that the girl’s father abandoned her, and that he’s still alive. When she discovers where he is, she decides to confront him, and ask why he left. To do this, she has to go south of the border, into Mexico, where she quickly runs afoul of a human trafficking ring.
After the overly long look at the rough-edged Rambo trying and failing to fit into a mold that was never made for him, this is when the movie comes to life. Once Rambo finally decides to take the lid off and allow himself to unleash the part of himself that makes Rambo who he is, the audience is treated to one of the most brutally savage cinematic experiences put on film.
Rambo draws the group of human traffickers to his own turf, and he’s waiting, ready to exact revenge like we’ve rarely seen. The sheer violence and unmitigated brutality Rambo uses to dispatch each of these men who sell young girls, is a vicious counterpoint to the attempted domestic simplicity from earlier in the movie.
John Rambo is vengeance personified in the most profound and bloody of ways.
The movie isn’t high cinema, but it does just what all the Rambo movies previously have done before it, which is to entertain while simultaneously shining a light on an unpleasant aspect of the world. In the first movie it was the poor treatment of Vietnam vets upon returning home. For part 2, Rambo showed the horrors suffered by POWs, and part 3 was a look at the Russian invasion of Afghanistan. The 4th film was a brutal, naked look at the atrocities of the civil war in Burma (Myanmar).
Don’t expect the same-old Rambo movie. It isn’t. Not by any means. The film takes time to look past the well-trained killing machine to see the man he has become, or at least has attempted to become. But when faced with wickedness so close to home, we finally, after all these decades, get an up-close and personal look at just how truly brutal John Rambo can be when pushed as far as any man can be pushed.
Some hate the movie, others enjoyed it as much as I did (a lot). Watch it for yourself and decide.