This postcard has the wrong street. It is on Public Street, not Main Street. The bank can be see at the left. 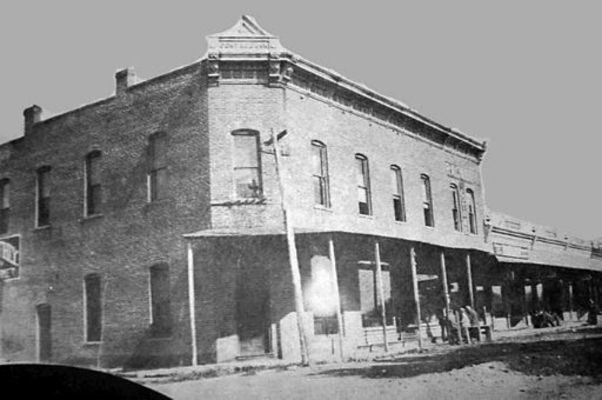 The old Center Bank pictured before it was demolished.
Previous Next

This article and photos are courtesy of Ron Leake, president of the Ralls County Historical Society.

In a short time, gaping holes were left in both levels of the two-story building.
Center Police chief Randall Hill condemned the building and the adjacent building that night and streets were blockaded. There were no injuries.
Mr. and Mrs. Lorain Owens of Monroe City had recently purchased the two buildings and were having them restored preparatory to opening a laundromat and a recreation room.
Mrs. Owens said Monday morning, “When the demolition crews finish we plan to start rebuilding as soon as possible and we will be looking into the possibilities in a few days. We may decide to use pre-fab buildings.”
It was reported that a window was being replaced in the structure the afternoon of the collapse. Center residents also reported that a sonic boom was heard Thursday.
George Osterhout was president of the first bank in Center and along with W.W. Epperson and J.A. Keithly was instrumental in having the bank built in 1889.
According to Dallas Osterhout of Center the bricks were fired on Osterhout land on South Public Street in a bee-hive kiln at the location of the Jack Palmer home. “How well I remember when my parents made garden it was my job to pick up the pieces of brick to cart away,” said Osterhout.
Lumber and building materials were hauled from Hannibal by team and wagon, a two-day trip. Lodging and board was supplied at Marion House at a cost of $1 per day for each trip.
M.L. Hulse and John Keithly started building the bank and the adjoining storeroom. The interior was finished with southern pine.
The second story was finished by the Baptist congregation. Church services were held there and in 1894 Roy Rice and Malia Smith were married there. They were the parents of Dorothy Sue Rice Cramer.
At least two businesses were housed in the building after the closing of the bank. Augusta Calhoun operated a harness, shoe and leather repair store there for several years. From 1947 to 1977 it was known as Palmers Recreation, owned and operated by Mrs. Oneta Palmer and her son, the late Bobby Joe Palmer.
The Senior Citizens center and the Ralls County Herald-Record office are located in the building adjoining the two condemned structures. Both were closed Friday, but reopened Monday morning.
The west lane of main street [sic] from the Senior Citizens center south to the post office remained closed to traffic Monday.