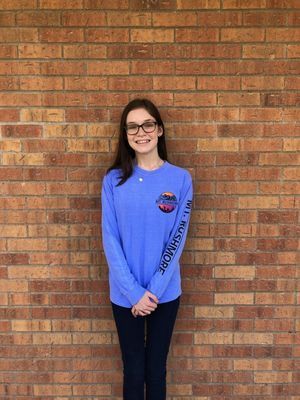 Jamie-Lynn Haley is a cheerful teenager from Perry with a bright smile and optimistic outlook on life. Not so unusual until you learn that she has been fighting chronic myeloid leukemia since last spring.
Chronic myeloid leukemia is a cancer of the white blood cells and is characterized by the increased and unregulated growth of myeloid cells in the bone marrow and the accumulation of these cells in the blood.
Jamie-Lynn was diagnosed in late May after she complained of headaches and pain when she ran in track. “When I was running I felt like I was hyperventilating,” she said.
A trip to the ambulatory clinic resulted in tests and scans. Tests showed her liver and spleen were enlarged and her spleen was pushing up against the bottom of her lungs, almost collapsing them. “I didn’t realize how sick I was. They told me they thought I had leukemia and were sending me to Cardinal Glennon in St. Louis.”
A bone marrow biopsy proved the diagnosis correct and a long series of hospital stays and trips back and forth to St. Louis ensued. Dr. Hugge came in and told them she had chronic myeloid leukemia, a rare form of cancer for kids. It’s usually found in adults 65 and older. “It was really crazy hearing that,” she said.
Jamie-Lynn’s body was fighting more than 65 times the normal number of white blood cells. Once the diagnosis was verified treatment began. Jamie-Lynn has had no chemotherapy or radiation, instead she takes an oral chemo pill. “At first it was rocky, then it went into a slow process,” she explained. She stayed in the PICU ward at Cardinal Glennon during treatment.
Another process was used that Jamie-Lynn said, “basically saved my life.” In two sessions her white blood count went from 650,000 to 320,000 and then to 150,000. Gradually the daily oral chemo pills have reduced the count even further. “Now my normal is 5400,” she said smiling. “That’s actually really great.”
While the oral medication keeps the white blood cell count down, she won’t be taking them indefinitely. She is scheduled for a bone marrow transplant in late November or early December. The transplant was necessitated when they found another cancer in which a chromosome associated with acute myeloid leukemia flips upside down and wraps around itself. “Now I have two cancers,” said Jamie-Lynn. This diagnosis made her the first pediatric case to have both cancers in U.S. cancer history. There are 20 other cases known, but they are all adults.
That would be a lot to take in for anyone, but Jamie-Lynn kept smiling and talked about her upcoming fashion show at Cardinal Glennon where she will walk the runway with Jordan Binnington, goalie for the St. Louis Blues. She’ll also participate in a Kids Rock Cancer pageant and sing a song she worked on with her music therapist. She’ll also sing at the Glennon Glow, a big fundraiser and at Glennon Golf, a fundraiser to raise awareness to fight childhood cancers.
Her optimism and upbeat personality were reflected in her admonition to her best friend, “You have to stay strong so I can stay strong.”
The Perry community and her school friends have all helped Jamie-Lynn during her illness. Proceeds from Rick’s Place Golf Cart Poker Run on Saturday, September 28 will go to Jamie-Lynn and her parents to help with the medical and travel expenses.
“I’m staying strong,” she said with a big smile.