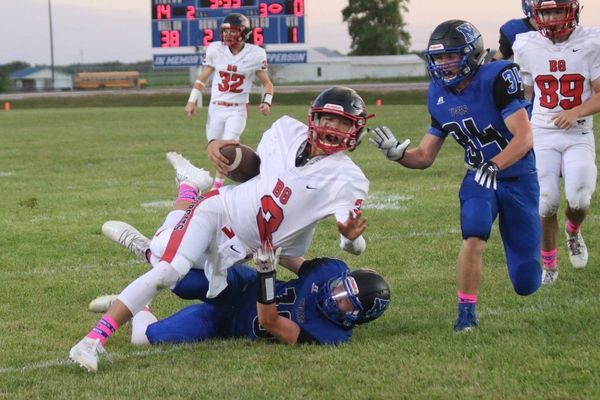 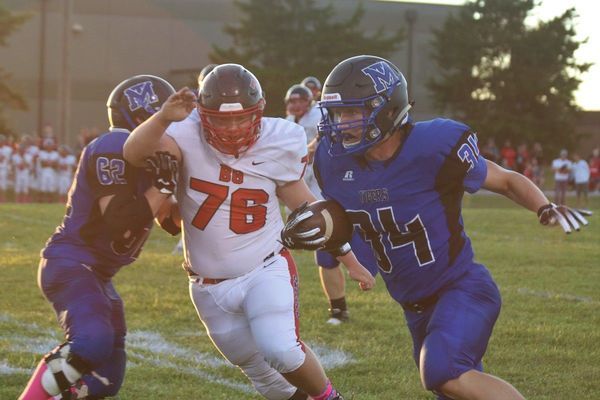 Landon Moss #34 runs the ball as Gavin Robertson blocks for him. 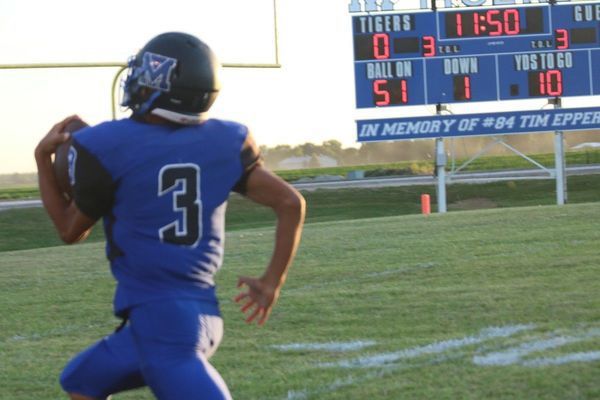 Lakoda Preston runs for a 90-yard touchdown on the opening kick at Friday, Sept. 13, home game against the Bowling Green Bobcats.
Previous Next

For the first half it looked like Mark Twain was going to scuttle the Bowling Green Bobcats at the Friday, Sept. 13, home game. But bad luck prevailed and the Tigers lost 26-14 in the first conference game of the season.
The Tigers gave their fans an early reason to hope when sophomore Lakoda Preston took the kick-off and ran 90 yards for a touchdown with only 13 seconds off the clock. Payton Hawkins’ pass to Logan Perrigo was good for the 2-point conversion and the score stood 8-0. Midway through the first quarter Mark Twain scored again when Perrigo drove in a one-yard run for the Tigers’ second and last touchdown of the game.
Bowling Green scored four times throughout the rest of the game and successfully kept the Tigers from the endzone. In the second quarter Austin Callahan scored on a 45-yard touchdown run making the score 14-6. Late in the third quarter Callahan’s pass to Nick Breakfield was good and Callahan successfully ran in the two-point conversion tying the score 14-14.
The Bobcats scored twice in the final quarter of the game. Deters punched in a 3-yard touchdown and with two minutes left in the game Callahan scored with a 47-yard run making the final score 26-14.
The Tigers had 133 rushing yards. Avery Epperson had 87 yards on 18 carries. Perrigo had 81 yards on 17 carries. Hawkins had 37 yards on 6 carries, completed 8 of 16 passes for 52 yards, and had one interception. Brayden McLeod had 3 returns for 12 yards. Ryan Spoonhower had 4 returns for 34 yards. Lakoda Preston had a 90-yard kick return.
Defensively the Tigers hit hard. Avery Epperson had 12 tackles and a quarterback sack. Mathias Bridges had 11 tackles and one quarterback sack. Evan Torrence and Ben Rule each had 7 tackles. Gavin Robertson had 5 tackles. Logan Perrigo had 4 tackles. Brendan Yelton, Spoonhower, McLeod each had 3 tackles. Landon Moss had 2 tackles and Hawkins had one.