Galloway Gives Hope for a New Direction in 2020 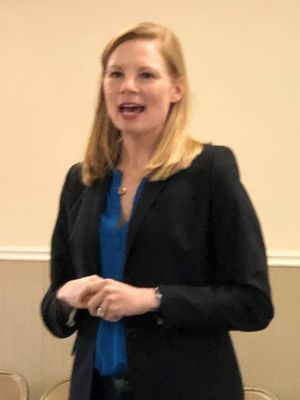 State Auditor Nicole Galloway announced her intention to run for governor at a grassroots campaign stop in New London. 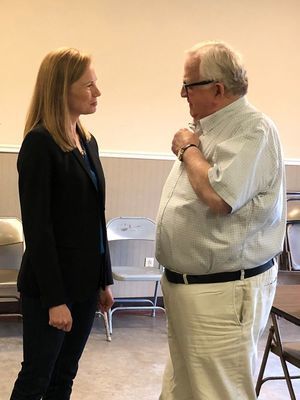 State Auditor Nicole Galloway stopped in New London Tuesday, Sept. 10, to let the people of northeast Missouri know she was running for governor of Missouri. The Lions Club in New London was the first stop on her grassroots campaign to bring reform and change to state government.
Ralls County Democrat Club president Rodney Rodenbaugh introduced Galloway as “a special, special guest” and cautioned the 75+ in attendance that “next year’s election will be here before we know it.”
Galloway, vivacious and energetic, first told the crowd, “My job as State Auditor is to root out corruption, waste, fraud, and abuse in Jefferson City and across the state.” The results were impressive. Her office, she said, had found 350 million dollars in government waste and had brought 45 criminal counts against corrupt officials. “And some of those are going to jail.”
Another example of the state government not working in the best interests of its citizens was the number of rural hospitals that are closing and the doctors leaving. “So even if you have health coverage, there’s no place to go.”
Health care was a topic repeatedly brought up to Galloway as she made her way through the crowd before speaking. “Look, kids are getting kicked off health care and this governor is doing nothing about it. To him this is not a crisis, not an emergency.”
She looked at the crowd and emphasized, “We don’t have to settle for this in Missouri. I’m offering a new way. As governor I will end this system.”
Missouri’s citizens work hard to get what they want, she emphasized, and deserve accountability for the tax dollars they pay. Her message to Gov. Parson, “You’ve been in Jefferson City too long.”
Galloway, 37, has hopes for the younger voters in the state. “They’re a very big part of the process. I think people are going to be very motivated. People are tired of the old way of doing things.”
Another issue close to families is education. Galloway felt the need to go to four days of school a week instead of five put a burden on families to find childcare. “More and more schools don’t have the resources and the funds to operate a full week.” She continued, “A bigger part of the state budget needs to go to education. That has to be a priority.”
An excited buzz filled the air as Galloway circulated among the crowd after her speech. Many of those listening put checks in the bowl adding to the grassroots campaign that will hopefully see Galloway elected as the first female governor of Missouri.
“It’s time for a change,” one older gentleman said as he dropped his contribution in the bowl.

End of Year Wrap Up