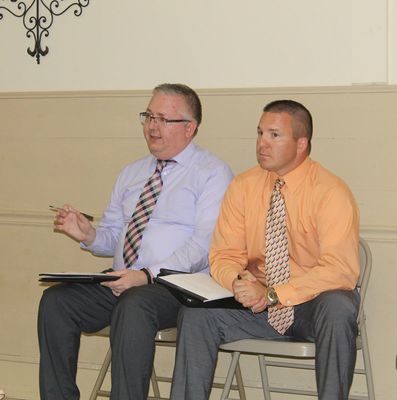 The Center City Council met on Wednesday, September 4th, for the regular monthly meeting. After calling the meeting to order, Mayor Dennis McMillen, asked the members of the State Auditors Office to address the council. Travis Owens introduced himself and Matt Shulenburg, the Senior Auditor on this audit. Mr. Owens explained that the Public Fraud and Corruption office accepted the request for an audit that was received from the City of Center in July. He added that this is a performance audit not a financial audit. They have four objectives for this audit: Evaluating the City’s internal operations, determining compliance with applicable laws (such as filing reports), evaluating the economy and efficiency of city practices, and determination of misappropriated funds. They are still in the field work phase of the audit - gathering records, preparing subpoenas for vendors, conducting interviews, etc. They won’t need to be in Center for more than a couple of days for this phase. He added that they do have a whistleblower hotline that anyone can call and provide information. Callers can remain anonymous. Mr. Owens closed by inviting questions from members of the City Council. Councilman Tom Bramblett asked when charges would be filed. Answer: The Auditors office does not have the power to press charges. This is up to law enforcement. Bramblett then asked when law enforcement could file charges. Answer: That is up to them, however, they will probably use the results of the audit to determine the charges. The Auditors office will be working with law enforcement. Councilman Cristy Browning asked how long before the results of the audit are available. Answer: Projecting less that two years...will need at least six months to complete the field work and then at least two more months to complete the report. Mayor Dennis McMillen asked when they would be able to submit the required financial reports. At this time, they cannot issue any reports without all the records that were removed by the auditors. Answer: The Auditor’s office can’t answer that. You can go ahead and file what you can to avoid penalties. The boxes of records should be returned shortly. Everything is being scanned and the originals will be returned. Mayor McMillen added that the penalties have been discontinued and the Council had submitted a letter to the Department of Revenue in lieu of a report.
The Council then proceeded with their agenda. Minutes were accepted as corrected and bills were approved as presented. A proposed culvert move was discussed, however, at this time, there is no funding available to cover the expense. No action taken.
Samantha Diffenderfer, Community Planner with Mark Twain Regional Council of Governments (MTRCG) provided information to the council members about federal grant funds that are available and that the City of Center is qualified to receive. She advised that MTRCG would help the council work through the process and complete the grant application. The CBDG funds total $750,000 and this is less than the $1.4 million needed. Ms. Diffenderfer advised the council to work with the project engineer and apply to USDA and DNR for funding to cover that gap. She also advised that the federal grant funds are available every year and can also be used for street repairs. If the council can get this first application submitted for 2019 funds, they can apply for additional funds in 2020. Mayor McMillen asked if they could apply for funds to cover repairs to the streets that will be necessary after the sewer work is completed. She advised, yes, they could apply for funds for that purpose.
Mayor McMillen read a letter from a resident of Center requesting that interest be discontinued on a large sewer bill that she is making payments on. After a brief discussion, Councilman Cristy Browning made a motion to discontinue accruing interest on the balance due. Councilman Shawn Couch seconded the motion. Motion passed.
Acting City Clerk, Jeanne Franke, advised that the city has a CD at the bank that is up for renewal this month. The CD is Sewer funds for $15,000. Councilman Cristy Browning made a motion to renew for a new 15-month term. Councilman Tom Bramblett seconded. Motion passed.
Mayor McMillen had a letter from the bank asking that one person be designated to request financial records. After discussion, it was decided that Clerk, Jeanne Franke, and Mayor, Dennis McMillen would be so designated. Motion by Councilman Shawn Couch and second by Councilman Steven Reynolds. Motion passed.
There were some issues brought up for discussion, including: No Parking area in front of City Hall - already addressed, no changes; pot holes where sewer work has been done - a load of cold patch will be ordered and spread; stopped up sewer - will be checked at manhole to determine if problem is on city or private line; valve replaced - will be done; ignition switch replaced in city pickup - will be done.
Clerk Franke advised that she did not need a new computer as previously approved. She had a computer and was able to purchase and load Quickbooks and Microsoft onto it. Instead of spending $1000 approved, she spent less than $500. She also reported that she is still having issues with the copier. Requested to get a maintenance agreement with Golden Ruler. No action taken.
City Attorney, Joe Brannon, presented a first review of an ordinance for private swimming pools. Council members were each given a copy. Discussion of this new ordinance at next month’s meeting. Attorney Brannon advised that the ordinance would also have to go through the City Zoning Committee.
A change order to the sewer project on the west side of town, that was discussed at last meeting, was presented for approval. Motion by Councilman Couch and second by Councilman Browning to approve. Motion passed.
The meeting was adjourned at 7:00 p.m. Next meeting is scheduled for Wednesday, October 2nd, at 6:00 p.m.