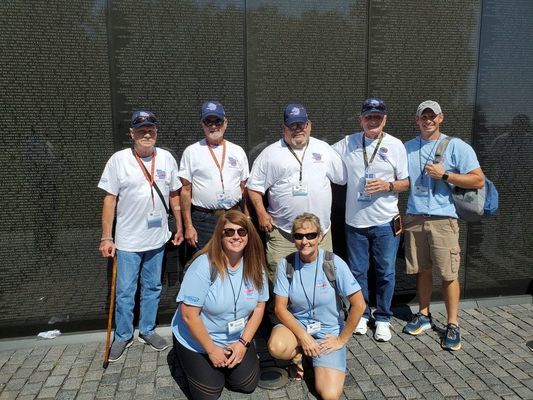 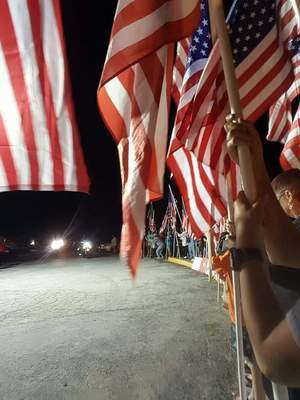 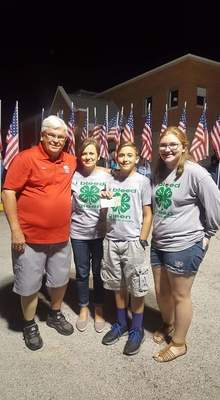 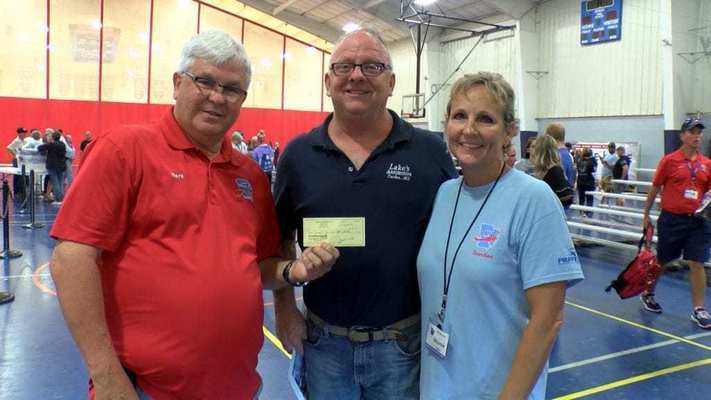 Lake’s Automotive LLC in Center, Missouri, donated $2,115. John and Sharon Lake hosted a side by side poker run to raise the donation. Sharon also participated as a guardian for her friend and Vietnam Veteran John Booth on the 55th mission which took place on Saturday.
Previous Next

When the group of Vietnam veterans left Hannibal LaGrange University on a chartered bus August 24, it marked the 55th mission of the Great River Honor Flight to Washington D.C. since the program started in April 2010.
Thirty veterans from Missouri, Illinois, and Iowa departed with 26 guardians at 2:30 a.m. for St. Louis Lambert Airport for their flight to Washington D.C. Veterans first stopped at the Vietnam Memorial before continuing to the Korea Way, Lincoln Memorial, World War II Memorial, Washington Monument, Air Force Memorial, and Arlington Cemetery. When they returned the group was given a motorcycle escort from St. Louis to the Mabee Sports Center at HLGU. The veterans arrived about 10 p.m. to an enthusiastic crowd of cheering family, friends, and neighbors.
Great River Honor Flight, a Missouri Nonprofit Corporation established in October 2009, is the Tri-States’ hub for the Honor Flight and to date has flown 1,760 veterans at no cost to them. Over the ten year span many area businesses, groups, and individuals have continued to provide the funds to support their mission.
The first years were dedicated to taking area World War II veterans to visit their memorial, dedicated in May of 2004. Great River’s mission as stated on their website “…is to honor America’s veterans that live in our area for all they have sacrificed by providing, free of charge, transportation to Washington D.C. to visit the memorials dedicated to honor their service and sacrifices.”
Two flights are scheduled to finish the 2019 tours; September 26 from John Woods Community College and October 17 from Hannibal LaGrange University.