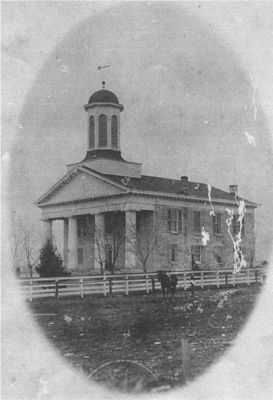 Killed in Texas – Belled by

(Date of publication unknown) Mr. John Abbay, of the firm of Blum & Co., referring to an article in last Sunday’s Republic in reference to the “only white buzzard shot in Texas,” says that he remembers very well the buzzard referred to was caught in Ralls County and belled and then turned loose. It is supposed that the bird grew white with age. The article from the Republic referred to is very interesting and is as follows:
Lex Ellis, son of Captain Ellis, of Burleson County, Texas, a few days ago shot and killed a white buzzard. The young man was plowing in the garden when his mother, who was making soap in the back yard, called to him to come and see the “biggest white bird in the world.” The buzzard was resting on the top of the barnyard fence. The boy looked at the strange bird a few moments, manifesting as much surprise as his mother. While they were gazing in awe and admiration the great bird flew across the lot and astounded the observers still more by rattling a little bell that was attached to its neck. The boy ran into the house and got a gun and killed the buzzard, in opposition to the earnest protestations of his mother. The old lady did not believe that it was feathers, flesh and blood, and when it fell off the fence, she covered her face with her apron and almost screamed, “Now, Lex, no tellin’ what you have done. Maybe you have shot and killed the ghost of one of your grandmothers or grandfathers.” The boy was a little more practical, and when he got within a few feet of the wounded bird his nose was greeted with an odor that is familiar to every country boy. His small store of ornithological knowledge enabled him to at once pronounce the big bird “an old buzzard – so old,” he said, “that he has turned gray.” A small sheep bell was attached to the bird’s neck by a steel chain. When the boy’s older brother came home, he noticed some letters on the bell. The side of the bell that came in contact with the bird’s neck was perfectly bright, but the other sides were thickly coated with rust and some sticky substance. It took the boys a long time to clean the bell sufficiently to reveal the letters. The inscription proved that the bird was very old and more than a thousand miles from the place where the bell was put on his neck. The date, “1860,” and “Ralls County, Missouri,” were sufficiently plain, but there were three names, only two of which could be made out. The first, “John Salling,” was perfect. The second was either “Judy” or “Iudy,” while the first part of the name begins with a G, followed by two small, badly blurred letters. The whole name was probably “Geo. Judy” or “Leo Judy.” The initials of the third name have been almost entirely effaced by time. The word “Gill” is all that can be made out, even by the aid of a fine microscope. The young man took the bell to the nearest village, where he heard a great deal more about the white buzzard. It had been seen several times before.
Upon one occasion it lit on an old dead tree near a meeting house where a crowd of two or three hundred negroes were enjoying a revival. Never did a religious meeting break up with less ceremony. As the big white bird circled around over the house tinkling its bell, the worshipers fled to their homes. Many of them left their “folks” and their teams hitched to the trees near the church. A farmer who lives near Lyons, who insists that he is not at all superstitious or easily frightened, says that the killing of this buzzard has solved a great mystery for him. He says that a few weeks ago he was plowing, when he suddenly heard the tinkling of a bell which appeared to be in the clouds above him. He stopped his plow and looked for a long time but saw nothing. He started his team again, but the tinkling of the bell continued. He was perfectly satisfied that he heard a bell and that the noise came from above, but he could see nothing in the heavens that could ring a bell. He heard the bell for two or three hours, and the farmer admits that for several days he was nervous every time he thought of the tinkling of that little bell. He saw two or three buzzards circling about above him and he noticed that one appeared to be white, but he thought it was the reflection of the sunlight, and it never occurred to him that one of them had a bell on its neck. The old gentleman appeared to be greatly relieved when he heard the story of the killing of a buzzard with a bell on its neck. If we have deciphered the date on the bell correctly, the big bird had carried the bell for at least thirty-five years. It would be interesting to know whether the people who put the bell on the bird’s neck are still living. Either this same white buzzard or another one that was equally as white was seen in this region about ten years ago. A party of hunters saw it, but it was flying very high and they did not hear the bell.