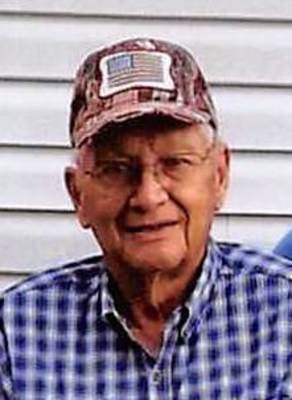 Raymond V. Dowell, Jr., 87, of New London, MO passed away peacefully at his residence at 7:45 PM Monday, August 26, 2019, with his loving family at his side.
Funeral services will be held 10:00 AM Friday, August 30, 2019, at the New London First Christian Church. Pastor Tom Day will officiate. Burial with full military honors provided by the Emmette J. Shields American Legion Post #55 will be in the Barkley Cemetery in New London, MO.
Visitation will be held 5:00 PM to 7:00 PM Thursday, August 29, 2019, at the Smith Funeral Home & Chapel of Hannibal, MO. Masonic Services will follow the visitation at 7:00 PM.
Raymond was born August 9, 1932, in Frankford, MO the son of Raymond V. and Edna E. (Manske) Dowell, Sr. He was united in marriage to Barbara Stewart on December 17, 1966 at the Salt River Christian Church by Rev. Steve Lake. She survives him.
Other survivors include a daughter Sarah Davenport of New London, MO; grandchildren, Micaela Seymour (Justin Swank), Nick Davenport (Kimberly Gonzalez), Nathan Davenport, and Mackenzie Davenport; great grandchildren, Madison Swank, Royce Seymour, and Ava Swank; and numerous nieces and nephews.
In addition to his parents, Mr. Dowell was preceded in death by a sister, Helen Ruth Van Hecke.

Raymond graduated from New London High School in 1949. Upon graduation, Raymond proudly served his country in the United States Army during the Korean Conflict.
Mr. Dowell worked as a truck driver along with raising livestock and row crops for many years before retirement
Away from work Raymond was an active member of the Ralls Masonic Lodge #33 and past Worshipful Master and longtime member of the Eastern Star, fifty plus year member of the Emmette J. Shields American Legion Post #55, Hannibal Coin Club, and past President of the New London Senior Citizens.

In his free time, Raymond enjoyed hunting, fishing, farming and playing his guitar. Raymond enjoyed playing country music with other colleagues at local nursing homes over the years. Raymond loved to socialize with people. He had the gift of never meeting a stranger.
Raymond’s biggest love was his family. He taught his grandchildren everything he knew about farming, hunting, fishing and God. Some of Raymond’s cherished moments were the holidays, birthdays, and family gatherings.
Raymond and Barbara were faithful members of New London First Christian Church and hardly missed a Sunday service.
Pallbearers will be Nick Davenport, Nathan Davenport, Mack Davenport, Josh Hathaway, Justin Swank, and Billy Johnson.
Memorial contributions may be made to the Pike County Hospice or the New London First Christian Church, in care of the Smith Funeral Home & Chapel.
Online condolences may be made to the family and video tribute viewed on Raymond’s memorial page at www.smithfuneralhomeandchapel.com.