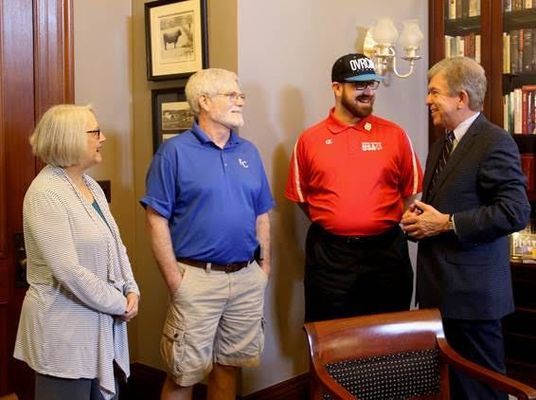 U.S. Senator Roy Blunt met with Colin Garrison, a Special Olympics athlete from Missouri, and his family. Colin represented Team USA this year at the Special Olympics World Games in Abu Dhabi. Blunt released the following statement after the meeting:
“From Missouri Special Olympics to the World Games and the White House, Colin always has a big smile on his face. It was wonderful to see him and his family and catch up. Colin is a terrific person whose hard work and dedication has paid off. Earlier this year, he took home three medals – including a gold – in bocce events at the World Games and he told me today he got promoted at Goodwill. You make Missouri and our country proud, Colin.”
Colin was the only athlete from the 15,000 Missourians who participate in Special Olympics to be chosen for the World Games. He returned to Kansas City with a silver medal in singles bocce, a gold medal in doubles bocce, and a bronze medal in four-person bocce. Colin and his family visited Washington to meet with President Donald Trump and First Lady Melania Trump at an event honoring Team USA at the White House.
Blunt and his family are longtime supporters of Special Olympics. As chairman of the Senate appropriations subcommittee that funds the Departments of Education and Health and Human Services, Blunt has prioritized increasing resources for two programs that support Special Olympics – Healthy Athletes and Unified Champion Schools. He has nearly tripled funding from $10.1 million to $28.1 million for these vital programs during his four years as chair. He has attended many Special Olympics events, including the World Games in Abu Dhabi and the opening of the Training for Life Campus in Jefferson City.