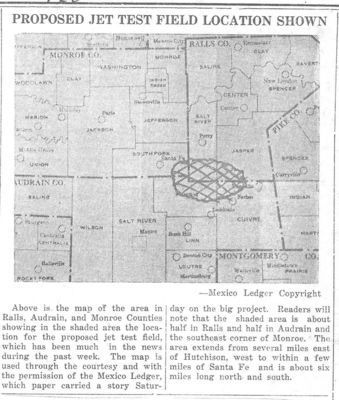 This is the conclusion of the article from last week’s edition. All information is courtesy of Ron Leake, president Ralls County Historical Society.

JET STRIP PROPOSAL GOES TO AIR PANEL.
According to word from Senator Thomas C. Hennings Jr., the location of a new jet field planned for this area, has been referred to a government panel of coordinators by Secretary of Defense Charles E. Wilson. The panel of the Air coordinating Committee, an independent agency of the executive department, will hold public hearings June 13 in St. Louis on the location of the jet testing field as well as on the question of location of the proposed all-military airport to serve St. Louis. St. Charles county and Lincoln county are seeking the all-military airport.

NAVY FAVORS SEPARATE JET TESTING FIELD
The hearing on whether military installations at the Municipal Airport in St. Louis should be moved to an all-military airport and on the location of a Navy jet testing strip drew a large and interested crowd at Kiel auditorium last Wednesday and Thursday. Aviation experts heard talks from Chamber of Commerce representatives of St. Louis, Naval officers, airport officials, McDonnell Aircraft officials, and many individuals.
The panel, primarily a fact finding group, which won’t pick the site for the jet testing field, made a 300 mile long, slow and low aerial survey on Monday, the 11th, reaching from a farming area in southern Ralls and northeastern Audrain counties to Scott Air Force Base, Ill. Mr. Robert H. Charles, executive vice president of McDonnell Aircraft, recommended a site 90 miles from St. Louis and said a test strip 30 miles from St. Louis (the St. Charles area) would be too close to St. Louis, for the surrounding area would be built up too quickly. He said it was hoped that the new strip would be ready by 1958.
Capt. Clayton Miller and Capt. J. Parke Sager, were Navy officials to speak. Capt. Miller stated that a military airport should be no more than 40 miles from St. Louis, while Capt. Sager thought it should be farther removed. Capt. Sager now is considering a plan to locate a McDonnell test strip 90 miles from St. Louis. He did not say where the proposed new test strip would be, but it is known that the Navy and McDonnell have agreed on a site in this area.
From all information which we have been able to gather it will be some time before a definite decision will be made on the project.
Among those from this area who attended the hearing were Grover Sutton, Mr. and Mrs. Bott Christian, Homer Jr. and Paul Moore, Aubrey Barney, Marshall Moore, Mr. and Mrs. Melvin Diechmann, Mr. and Mrs. Abe Asbury, Mr. and Mrs. W.R. Brown, Mr. and Mrs. Albert Sankpill, Mr. and Mrs. Darrell Parish, Lee and Mac Cobb, Duane Gibson, Mr. and Mrs. Orge Robison, Gail Tonecray, Lee Sonwalt, and J.E. Mollett.