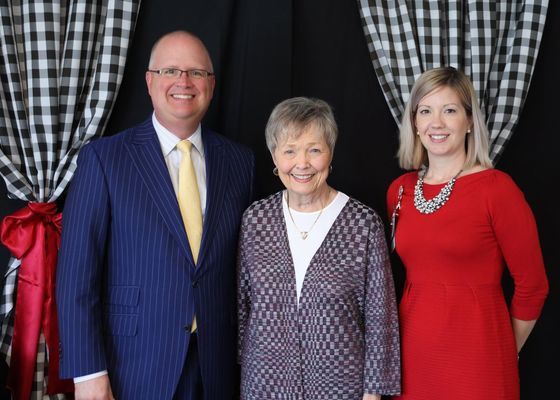 Pictured from left are Todd Ahrens, President and CEO of Hannibal Regional; Kim Ahrens, 2019 Volunteer of the Year and Alicia Rollins, Director of Volunteer Services.

Hannibal Regional Auxiliary was pleased to recognize Kim Ahrens as the Volunteer of the Year at their annual Service Awards luncheon on April 15, 2019 at the Hannibal Country Club.

Since joining Hannibal Regional Auxiliary Kim has given over 2,200 hours in service and has been part of the Board of Directors for four years. She volunteers her time in a variety of areas including the reception desk, in Judy’s Boutique, in waiting rooms and at the Caring Cup. Kim also serves as chairperson of the Recruitment and Retention committee. One of the projects she enjoys the most is being part of Project Community Connect and helping to distribute hygiene bags and birthday kits.

Kim has been a lifelong resident of Hannibal and celebrated her 50th wedding anniversary with Cliff Ahrens in 2018. Aside from the Auxiliary, Kim also gives her time to several other community organizations and enjoys spending time with her grandchildren.

The Hannibal Regional Auxiliary was formed in 1993 to help patients, families and visitors in a variety of ways and contribute to the community. Today, with more than 260 members, the Auxiliary donates approximately 25,000 hours of service each year. The Auxiliary provides service in several areas including Judy’s Boutique, James E. Cary Cancer Center, Hannibal Children’s Center, reception desk, waiting rooms and more.

Help us make Hannibal Regional Auxiliary even stronger! If you like to help others, organize, create, cook, network and contribute to your community, come join us as part of the Auxiliary. For more information, visit hrhonline.org or call 573-248-5272.