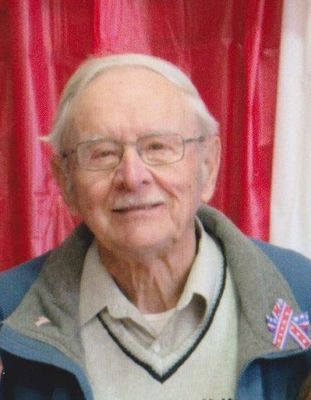 Funeral Services will be at 10:00 AM Tuesday, January 8, 2019 at the James O'Donnell Funeral Home in Hannibal, MO. Rev. Tim Goodman will officiate. Burial with Full Military Rites by Emmette J. Shields American Legion Post #55 will be at Barkley Cemetery in New London, MO.

Friends and family are invited to James' Life Celebration at a visitation that will be held from 6:00 PM - 8:00 PM Monday, January 7, 2019 at the James O'Donnell Funeral Home.

James was preceded in death by his parents.

James was a 1949 graduate of Frankford High School.

James moved to Peoria, IL in 1949 to accept a position with the Caterpillar Company. He later entered the United States Navy and served his country proudly during the Korean Conflict.

In 1951 James met his future wife, Lewanna and they were later married in 1952. They later decided to move back to Frankford, MO to live on the family farm in 1962.

James would then start his career with the Missouri Department of Transportation that would span 30 years in the district office, where he retired in 1993 as the district auditor. In his retirement James also sold real estate for Prestige Realty Company.

James enjoyed hunting deer, quail, and raccoons and fishing on the Salt River. James had a passion for gardening and participated at the Farmer's Market in Hannibal, MO. James took pleasure in reading, with finance and history being some of his favorite subjects.

James loved life on the family farm. The farm was special to him as he moved there when he was only five years old. James often told his family that he couldn't think of any other place he would rather live than on the farm. Most of all, James cherished the time he spent with his family and his beloved dabble dachshund, Gretel.

James was an active member and past president of the Travelers Protection Association (T.P.A.) for many years.

Memorial contributions may be made to Northeast Missouri Humane Society.

Online condolences may be made, and video tribute may be viewed at www.jamesodonnellfuneralhome.com